Would NYC’s new rules for solitary confinement have saved the life of 19-year-old Andy Henriquez?

Henriquez was brought to Rikers Island when he was only 16. Three years later, he was still awaiting trial when he was placed in isolation. Henriquez had complained of chest pains for seven months before being thrown in ‘the bing,’ but no one at the prison took him seriously.

Health and correction staff ignored Henriquez’ increasingly-dire calls for help, to the point where other inmates on his block began shouting for someone to save him. But no one ever did. Henriquez suffered alone and in extreme pain, given only a prescription for hand cream under the wrong name, until he eventually died from a tear in his aorta.

The question of whether things might have turned out differently for Henriquez stood out in my mind on Tuesday as all 7 members of NYC’s Board of Correction (BOC) voted to adopt changes to the city’s solitary confinement policy.

The amendments featured an end to solitary confinement for all 18 to 21 year old inmates by 2016, “provided that sufficient resources are made available to the Department for necessary staffing and implementation of necessary alternative programming.” Effective immediately, solitary confinement will no longer be used for 16 and 17 year old inmates, those suffering from ‘serious mental illness,’ or those with owed-time.

The amendments also pave the way for the construction of a controversial new isolation area on Rikers Island called the ‘Enhanced Supervision Housing unit,’ or the ESHU, which will cost $14.8 million, introduce 250 new isolation beds to the island and have its own specially-trained, full time staff. END_OF_DOCUMENT_TOKEN_TO_BE_REPLACED 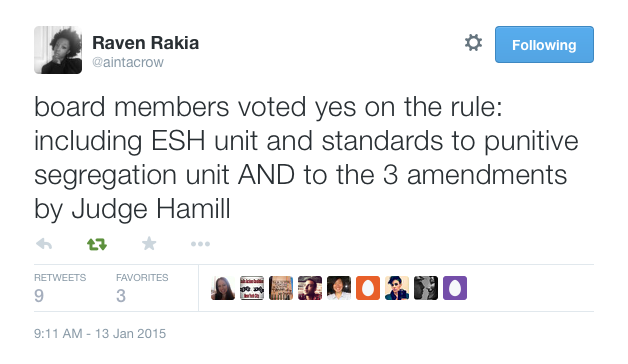 This post is being updated throughout the day. Please check back later for more updates.

Here is a copy of the final rules approved by the BOC yesterday.

I’ll have more to say on this in the next day or two when I have time to put together a full post, but I would be very cautious of reports and official statements touting Rikers as a new ‘model for reform’ given its proposed restrictions on solitary for juvenile offenders. Not only because there are so many questions that have yet to be answered concerning alternative programming and its funding, but also because of the ways in which mentally and physically ill inmates have been left exposed to Rikers’ new super solitary unit, aka the ESHU, at the discretion of one of the most untrustworthy prison contractors in the nation.

According to Raven, the protection gap for 18-21 year olds will, in fact, be closed — but there’s a hitch:

@bsonenstein btw gaps for 18-21yo supposed to be closed for 2016 provided there is "adequate funding". not closed yet http://t.co/DbzignXAIa

That means juvenile prisoners may still be subject to isolation for the remainder of this year at least. Solitary confinement for this age group will end in 2016 provided there is “adequate funding” for alternative programs to take its place (although it’s unclear what exactly those programs would look like).

So I guess we’ll have to wait until next year to see if NYC has enough money to stop torturing young prisoners with isolation. END_OF_DOCUMENT_TOKEN_TO_BE_REPLACED